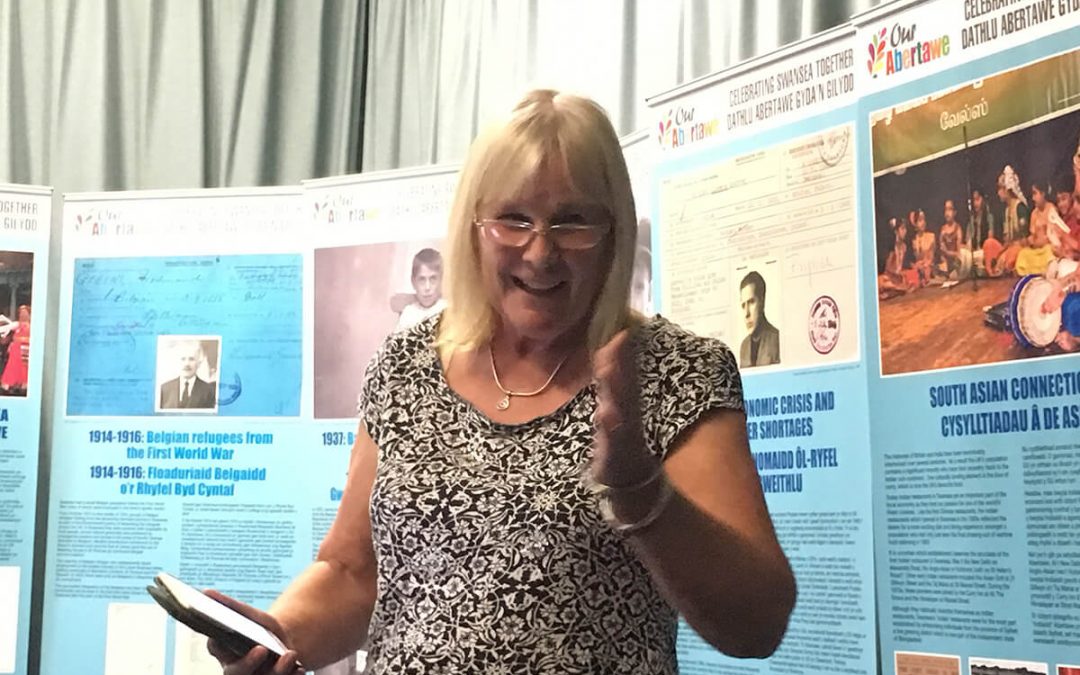 Our colleague Carolyn Davies sadly passed away on the 7th of April, 2018, after a brave battle fought with dignity. Our fellow trustee, Sandra Morgan, a close and lifelong friend of Carolyn’s, has written the following tribute.

I met Carolyn in Coedffranc Primary School back in 1976. We were both newly qualified teachers and shared our ideas and professional practice. We were the “young kids on the block” in a large school of an experienced and well-established teaching staff. We supported each other as close colleagues and shared many, many happy times and laughter with the pupils.

In 1983 Carolyn was appointed as a deputy headteacher at Clydach Infant School where she further developed her professional skills and practice. Her special love for the arts curriculum was being continually developed into her daily practice. She was fascinated by the power of art to engage children across the curriculum. She inspired those teachers around her to use art techniques in their daily teaching across the curriculum. A former teacher now residing in Sydney sent me an email illustrating just this point. She writes:

“I know that I learnt a lot about art from Carolyn. I think that trying out various techniques to appreciate children’s art all those years ago inspired me and gave me the confidence to have a go at producing my own art in mixed media in later life”.

In 1985 Carolyn’s career took a change of direction when she was appointed as the Teacher Adviser for Drama for the then West Glamorgan County Council. This was a new challenge which she wholeheartedly embraced. It focused on training fellow teachers to develop further their drama techniques and skills. Carolyn always focused on the PROCESS rather than the end product. The children were always at the centre of her thinking; how art teaching and learning impacted on them and improved their life skills and opportunities.

Then in 1992 Carolyn’s career took another change of direction when she was appointed as Teacher Adviser for Art and Drama for the then West Glamorgan County Council. This was a position she relished undertaking because of the wealth of theoretical knowledge obtained at the University of Bath which she could now translate into her professional life. She could at last influence and impact her art philosophy and practice to other teachers and educational practitioners. Ultimately, the children and young people would benefit from her development/research work to promote excellent artistic teaching and learning experiences throughout the schools and colleges.

Carolyn was actively involved in so many other professional groups and institutions. I will just give you a flavour of those most dear to her:

Theatr na nOg – Chair of Board and actively supported them since its inception.

The Josef Herman Art Foundation Cymru was especially close to her heart. She has devoted herself tirelessly to their work in the community since 2002. Her roles have been multi-faceted – including that of being chair and vice chair, leading and managing the Schools Programme and creating an art trail for the National Eisteddfod annually. The two-year partnership with Mining Josef Herman with Tate Britain, Margate Contemporary and Tate Liverpool was the high pinnacle of success for both Carolyn and the Foundation’s Trustees and Friends. Her impact and determination over the years to promote the Foundation has been inspirational. This is reiterated by the Trustees:

“Carolyn’s strength, focus, determination and networking skills ensured the sustainability of the Foundation’s Schools Award for the years to come”.

Carolyn co-ordinated the Arts In Action programme since 2000 with the University Wales Trinity St. David.

She has managed many community projects such as Criw Olion based at the Phoenix Centre in Townhill.

Tan Dance – Ariadne Project. Carolyn worked in close partnership with Tan Dance for many years culminating in a European Project working with migrants. She was also the creator of Troy Boyz. The central aim being to utilize dance as a tool for education, integration and social change.

Carolyn was an active member of SWANSEA FESTIVAL.

I have merely touched upon all her outstanding work to date. Her legacy to arts education is formidable and far too vast to illustrate today.

Never one to resist a challenge Carolyn embarked on yet another new venture in 2009 and became a freelance Arts In Education Consultant, Adviser and Co-ordinator by establishing Oyster Education, of which she was the director. This venture was highly successful where she forged new partnerships which are far too numerous to mention.

On a completely different note, Carolyn has written many learned articles for numerous organisations but I feel that she was most proud of her partnership with Gomerpont  Books who have published her books:

Carolyn’s legacy to the art world and education is immense as demonstrated in this brief overview and serves as a testimony to her integrity, drive and endeavour to promote the Arts in Education in all its forms for the benefit of her pupils and young people.

Carolyn will be profoundly missed by all those who worked alongside her. Her vision and enthusiasm was infectious and will be hard to replicate.

I would like to conclude by quoting the words of Geinor Styles, Artistic Director of Theatr Na Nog as I believe they encapsulate Carolyn’s educational philosophy clearly:

“Carolyn was fuelled by the rights of every child to see and experience the arts and as a colleague she put the child’s experience right at the heart of the work. And we continue to believe that ethos”.

Error: (#10) This endpoint requires the 'manage_pages' or 'pages_read_engagement' permission or the 'Page Public Content Access' feature. Refer to https://developers.facebook.com/docs/apps/review/login-permissions#manage-pages and https://developers.facebook.com/docs/apps/review/feature#reference-PAGES_ACCESS for details.
Type: OAuthException
Code: 10
Please refer to our Error Message Reference.